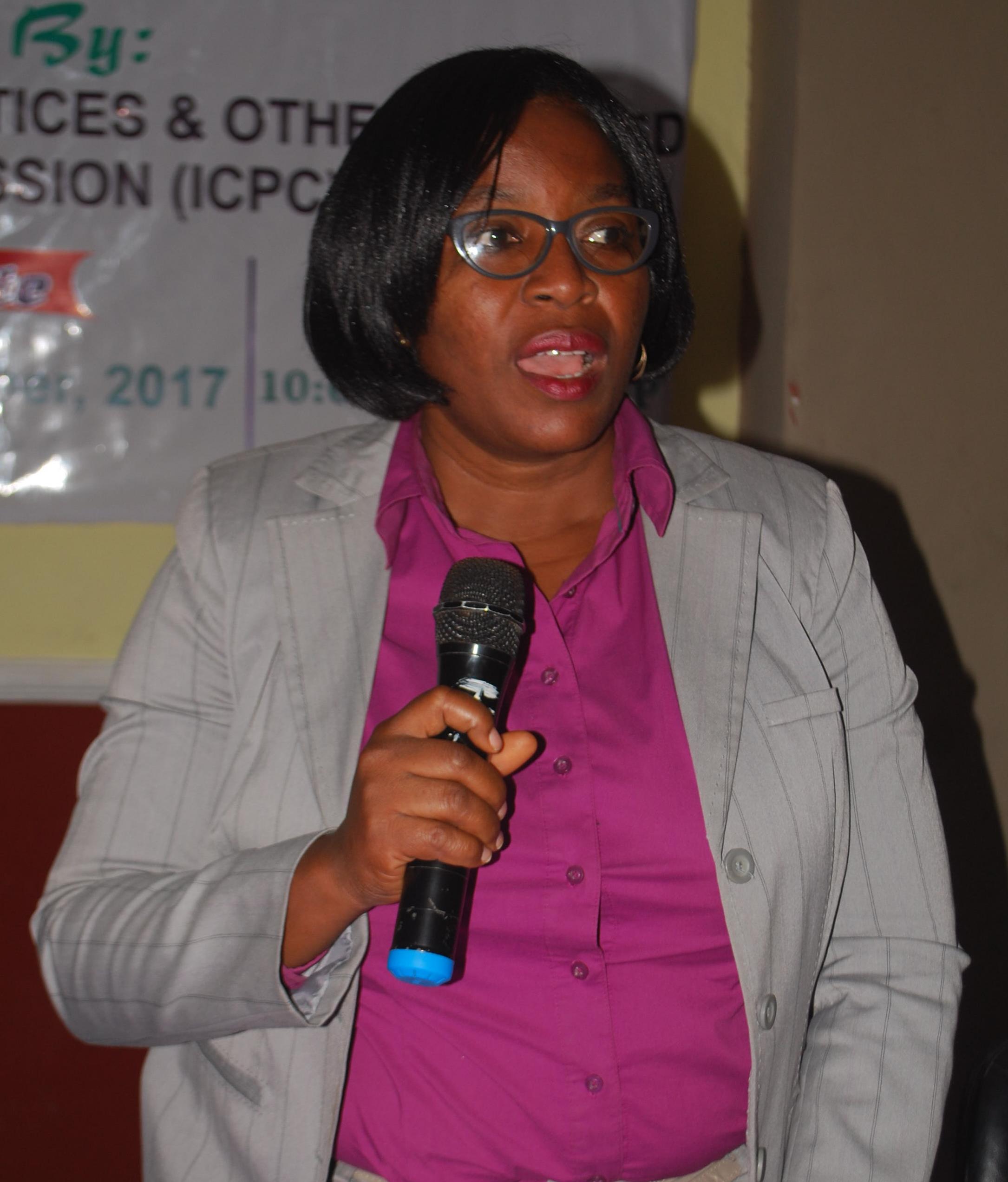 ICPC engages Leaders of Religion in Campaign against Corruption

Determined to leave no stone unturned in its drive to enshrine integrity as a culture in Nigeria, the Independent Corrupt Practices and Other Related Offences Commission (ICPC) has organised a workshop for Leaders of Religion in Ekiti State.

The workshop tagged “One-Day Anti-corruption Workshop for Leaders of Religions” held at Ado-Ekiti which was well attended by both Christian and Muslim religion leaders in Ekiti State was organised by ICPC in order to leverage on them to escalate its anti-corruption campaign.

Speaking at the event, Assistant Commissioner, ICPC Office Osun State, Mrs. Ngozi Olisaelo who represented the Acting Chairman of the Commission said it was imperative to organise the forum because ICPC believed that leaders of the various religions were important in spreading the anti-corruption message to the grassroots.

Mrs. Olisaelo explained that most Nigerians were either Christians or Muslims, and it was therefore necessary to constructively engage leaders of the two religions in the spread of anti-corruption messages through worship centres.

She said ICPC had on-going programmes aimed at preventing corruption in the society in order to enshrine integrity, honesty, transparency and accountability, which would result in good governance and socio-economic growth of the country.

In his remarks, the Chairman of Christian Association of Nigeria (CAN), Ekiti State Chapter, Reverend Joshua R. Orikogbe commended ICPC for organising the forum. He explained that there was need to “tackle corruption the religious way because everybody would stand in judgement on the last day”. He also encouraged the participants to do what was right in order to move the nation forward.

Also speaking at the occasion, the Chief Imam of Awo Ekiti, Alhaji Agbaje A. Ayoola in his remarks said corruption was a cankerworm that had eaten deep into the nation’s fabric and therefore urged participants to have constructive discussions that would lead to ways of curbing it.

The first paper titled “Overview of the Corrupt Practices and Other Related Offences Act 2000” was delivered by Mr. Jimoh Sulahiman of Education Department, ICPC. He said the universal definition of corruption was “abuse of power and public trust for selfish gain”.

Mr. Jimoh educated the participants on the different types of corruption which he said included bribery, gratification, giving false information, falsification of documents, awarding contracts without budgetary allocation, and abandonment of project after money had been collected.

He explained further that perpetrators of corruption were people in the society, and that the claim of ignorance on what the law says about corruption was not acceptable under the laws of the nation, hence the need to enlighten and educate people on and against corruption.

Mr. Jimoh maintained that failure to tackle corruption would consequently lead to the erosion of development and other adverse effects which include widespread poverty, unemployment and moral decadence.

Reverend Joshua Oritogbe delivered the second paper titled “Religion and its Institutions as Veritable Tools in Combating Corruption: Christian Perspective”. In his opinion, corruption manifests in every aspect of the society because it affects everyone. He explained that in the past, citizens would rather do what was right unlike the present where they would look for ways to circumvent the law, knowing that they would probably get away with it through the same corruption.

The cleric said corruption had a spiritual root which he traced to the human heart, where evil generates from and could be tackled through re-orientation of the heart. Citing biblical verses to back his claim, he said “When human hearts are not in fellowship with God, they are preoccupied with their own interest and fail to accept God’s will as the norm of action”.

According to him, the Church could combat corruption through recourse to where the Scripture shows that God did not create a corrupt world. He concluded by admonishing Christians to remember where the scripture points out that it was only the blessing from God that was worth having.

According to Dr. Bello, although Islam has zero tolerance for corruption, Muslims all over the world are not immune to it hence the importance of discussing how to curb it. He said if all humans realised that they were accountable to God on the day of judgement, they would not constantly think of ways to make more money without giving consideration to whether it was illegal or legal.

He explained and drew quotations from the holy book of Muslims to show how it frowns at corruption. According to him, Quran chapter 2 verse 188 says “and eat up not one another’s property unjustly (in any illegal way e.g. stealing, robbing, deceiving, etc), nor give bribe to the rulers (judges before presenting your cases) that you may knowingly eat up a part of the property of others sinfully”.

He said when Muslims fight corruption, it is regarded as good work, and therefore he encouraged all the Muslim clerics present at the workshop to lay more emphasis on the various portions of the Quran and Hadith that can be cited against corruption in the preaching of their sermons.