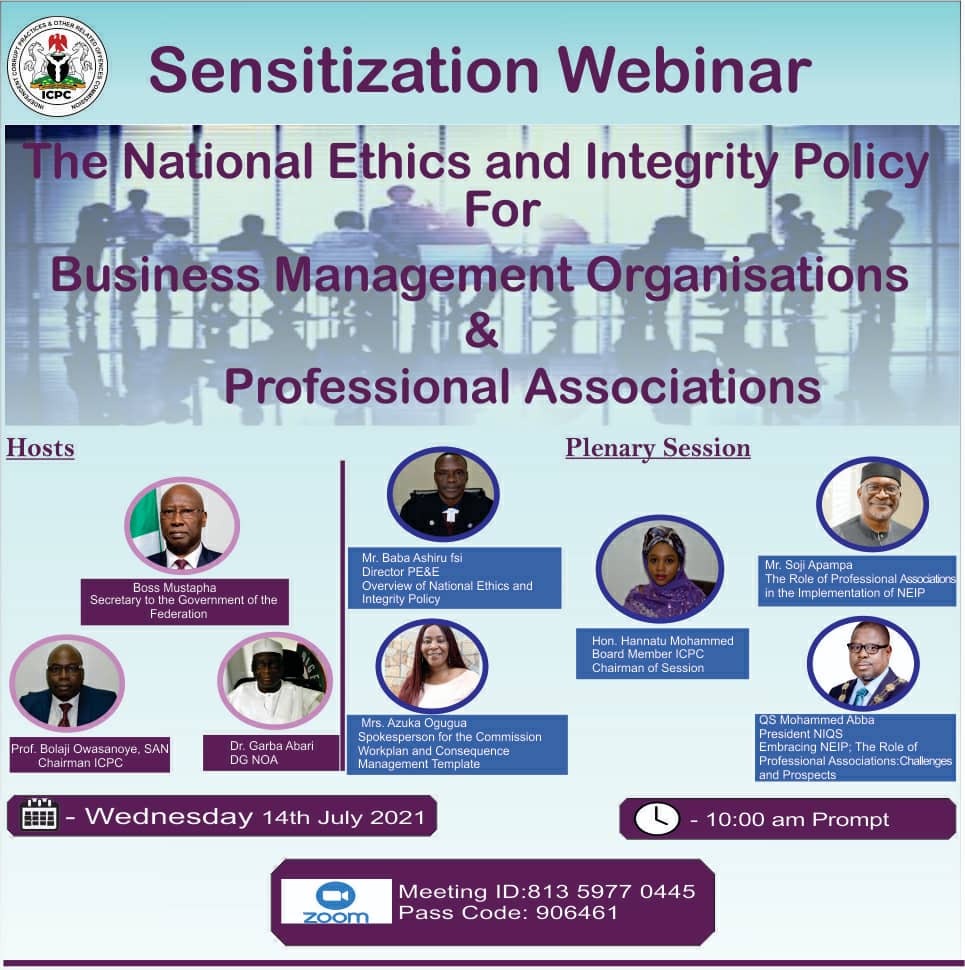 The Chairman of the Independent Corrupt Practices and Other Related Offences Commission (ICPC), Professor Bolaji Owasanoye, SAN has charged Professional Associations (PAs) and Business Membership Organisations (BMOs) to imbibe the 7 core values of the National Ethics and Integrity Policy (NEIP) in the discharge of their duties, as they play a pivotal role in the implementation.

Owasanoye gave this charge in his welcome address at a one-day webinar organized by the Commission titled: Creating Partnership with BMOs and PAs on the Implementation of the National Ethics and Integrity Policy.

The ICPC Boss who was represented by Hon. Board Member Mrs. Olubukola Balogun, said that the event was aimed at resuscitating the core values contained in the policy adding that so much was expected from them, as drivers of the economy, for the successful implementation and sustainability of the policy.

He encouraged PAs to make moves to enforce the ethics of their profession by punishing erring members and rewarding those found to be honest and impeccable.

He further advised participants to actively contribute to discussions so that they can play the role expected of them in the implementation of the policy.

In his opening remarks, the Director-General, National Orientation Agency (NOA) Dr. Garba Abari said the event was important as issues surrounding ethics and integrity in the country needed to be addressed.

He stated that the impact of collapsed values not only affected national development objectives, but also affects every aspect of our lives.

He recommended that BMOs and PAs looked hard at their code of conduct with special focus on the ethics of their profession and ensure that it was effective and, where need be, refer to the NEIP for guidance.

Abari went further to encourage participants to apply what they would learn from the event such that every aspect of their work and life would feel the positive impact.

The NOA DG called on civil society groups, religious groups, the family and school systems to rise up to expectations so as to bring the nation back on course to ethical standards and integrity in all spheres.

The President of the Nigerian Bar Association (NBA), Olumide Akpata in a goodwill message said the NEIP was a welcome development, adding that ethics was a core strength in the NBA as the association ensures that lawyers abide by the code of the profession.

The NBA president, who was represented by Okechukwu Uzoechi, urged participants to make concerted efforts to ensure that the erosion of ethics which has risen to a worrisome level, is fixed.

Also in her goodwill message, the President of the Institute of Chartered Accountants of Nigeria (ICAN) Mrs. Comfort Olu Eyitayo, who was represented by Ifeoma Okwuosa stated that without probity and integrity, Nigeria would be in trouble.

She also revealed that ICAN was happy to be part of the event as “Accuracy and Integrity” was their motto. She therefore pledged that the association would continue to maintain integrity in the discharge of their duties.

The opening ceremony was followed by a technical session chaired by Hon. Board Member, ICPC, Mrs. Hannatu Mohammed. Setting the tone for discussions, she explained that the session aimed to educate the participants on the policy as well as highlight the important roles they play in building the society.

In his paper presentation titled: Overview of the National Ethics and Integrity Policy, lead presenter, Director Public Enlightenment and Education Department of ICPC, Mr. Ashiru Baba, fsi said the policy was aimed at promoting the 7 core values and hoped that participants would imbibe them as a way of life so as to minimize corruption drastically.

He added that the policy was targeted at all Nigerians across the country and advised the participants to enforce the ethics of their profession while working closely with Anti-Corruption Agencies (ACAs) to report erring officers.

Spokesperson for the Commission, Mrs. Azuka Ogugua, was the first discussant and in her presentation titled: Workplan and Consequence Management Template of the NEIP,  informed participants that the template was designed to set benchmarks for the implementation of the policy.

She also said that the template addressed pain points that hindered professionals from having integrity, and prescribed incentives for compliance.

Discussing the Role of Professional Associations in the Implementation of NEIP, CEO Convention on Business Integrity, Mr. Soji Apampa, said that the implementation of the policy could not be done by ICPC alone.

He highlighted how corruption risks could be detected, to what extent and how they can be prevented while stating that compliance and the ability to get it lay in the hands of the association and their members.

The last discussant at the event, President National Institute of Quantity Surveyors (NIQS), QS Mohammed Abba Tor, in his paper tiled: Embracing NEIP: the Role of Professional Associations; Challenges and Prospects said the key challenge when it comes to policies in the code of conduct in PAs is enforcement.

The NIQS president who was represented by the Deputy President, Mr. Olayemi Shonubi, advised PAs to begin to name and shame erring officers as a deterrent for corrupt persons as well as hold their members accountable.

He also suggested that the NEIP be infused into the curriculum of institutions of learning and training academies.

The plenary session was interactive as participants sent in their questions and suggestions, and these were responded to. Some of the participants who spoke during the session include Mr. Denja Abdullahi, Engr. Olumoh Sharafadeen, Paul Anavhe, Jr. Friday Udo, etc.