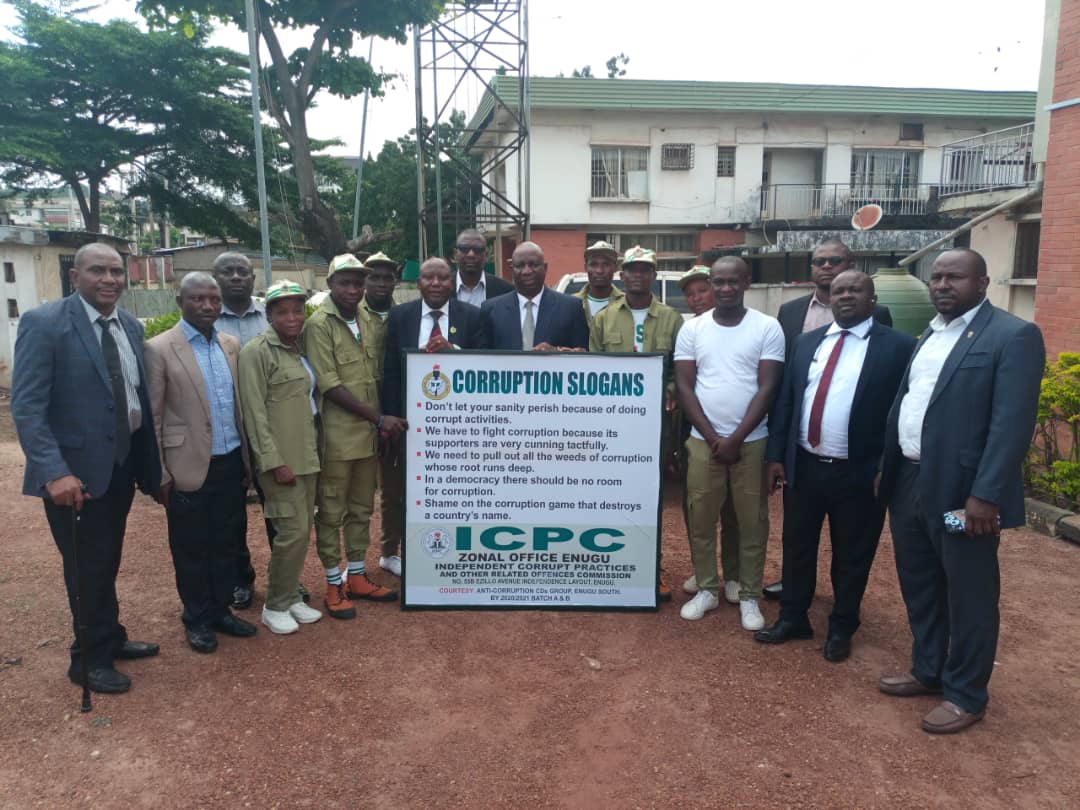 The Resident Anti-Corruption Commissioner of the Independent Corrupt Practices and Other Related Offences Commission (ICPC), Enugu State Office, Barr. Amedu Sule has charged youth corps members in the country to remain committed to the war against corruption.

He stated that youth corps members, as the younger generation of the nation, should strive and make concerted efforts to see that corruption is brought to its knee, saying that they were the most vulnerable and most affected by the menace posed by corruption.

He further explained that corps members that served their fatherland in the 70’s and 80’s enjoyed their service years more than the present youth corps members, as according to him, the former had opportunities of securing gainful employment and other benefits at the end of their service year, whereas the latter roam the streets looking for non-available jobs.

The Commissioner emphasized that corruption affects all aspects of human endeavour and therefore encouraged the corps members to remain steadfast and committed to the fight against corruption so as to create a better society for themselves and their children yet unborn.

He assured the corps members of the Commission’s preparedness to always partner and collaborate with them on issues of corruption, stating that the Commission’s door will always be opened to them.

The RAC, commended the laudable initiative of the batch A and B 2020/2021 NYSC Anti-Corruption CDS group of Enugu South LGA for putting together various ICPC anti-corruption messages on a billboard and presenting same to the Commission, promising that their good works would always be remembered.

Earlier, the President of NYSC Anti-Corruption CDS group, Enugu South, Christopher J. Udoka thanked the Commissioner for the opportunity given to them to come on the courtesy visit.

He observed that ICPC had been doing a lot in the fight against corruption, judging from what they had seen and from what they have heard, and as such decided to show more commitment to the fight by coming up with initiatives aimed at enlisting and fostering public support in the fight. This prompted their production and presentation of the ICPC Anti–Corruption messages billboard for educating members of the public.

Mr. Udoka went further to state that the aim of their visit was also to learn more of the workings of the Commission and to solicit for stronger synergy.