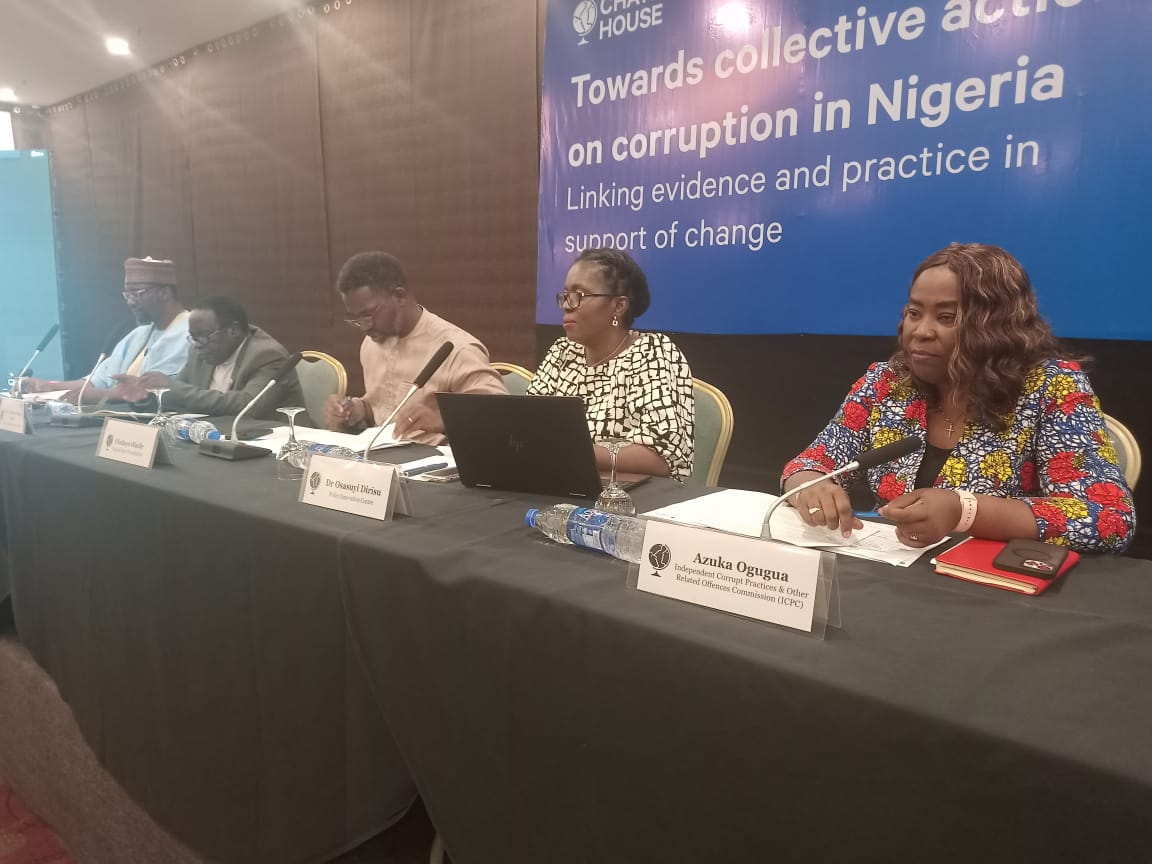 Anti-Corruption experts in Nigeria have called for a collective and multifaceted approach to the fight against corruption in Nigeria, while advocating the reinforcement of both anti-corruption laws and preventive mechanisms to curb corruption.

This call came during a conference organized by Chatham House, in Abuja recently tagged, “Towards Collective Action on Corruption in Nigeria: Linking Evidence and Practice in Support of Change” which was aimed at understanding how corruption becomes sustained as a collective practice as well as the social drivers that determine what actions are acceptable to or disapproved by citizens, with a view to examining the effectiveness of anti-corruption interventions, and charting a way forward.

Speaking during one of the panel discussions, the Spokesperson of the Independent Corrupt Practices and Other Related Offences Commission (ICPC), Mrs. Azuka Ogugua noted that the Commission’s approach to tackling systemic corruption in the education sector include the development of the National Values Curriculum, Systems Study and Review, Corruption Risk Assessment of different levels of the Education sector, tracking education-focused constituency projects, introduction of Clubs and activities for students, amongst others.

She listed the results of these strategies, reiterating that there is more still to be done. She said, “ICPC is committed to preventing infractions -working with MDAs, mobilizing the public to join it to fight these corrupt acts, and enforcing sanctions against those who fall foul of the law.

“For ICPC, the primary goal remains the reduction of impunity and corruption-prone behaviours through corruption-resistant systems, ethical excellence and robust citizen demand for transparency and accountability.”

Also, the Provost of the Anti-Corruption Academy of Nigeria (ACAN), the training arm of ICPC, Professor Olatunde Babawale, reiterated the need to adopt a multi-disciplinary approach to overcome corruption, as corruption is a multi-dimensional problem.

Professor Babawale revealed that studies by the Academy have shown that corrupt practices could be hidden within legitimate practices.

As such, he opined that prevalent legal approach would not be able to deal with such practices because the vehicle deployed for the corrupt practices were legitimate in the sight of the law. His words, “In essence, a practice that is commended and encouraged by the law can be the cover for engaging in corruption.

“An example is the ordinarily laudable idea of Corporate Social Responsibility (CSR) that allows corporate entities to give back to society through philanthropy. By law, CSR gifts can only be donated to the MDA as an organization and not personally to individuals within the MDA. However, in order to disguise unlawful gifts to public officials, private businesses donate such gifts under their CSR schemes, knowing fully well that the ultimate beneficiary are individual officials and not the MDA.

“This research finding can be deployed in making necessary adjustments to the law and policy relating to CSR. So, for example, rather than looking at a matter from the prism of law alone, it is analysed in the light of sociology, psychology, history, politics, psychiatry etc.”

Other speakers at the conference include the Catholic Bishop of Sokoto Diocese, Matthew Hassan Kukah, who kicked against the placement of much expectations on religion to disabuse the minds of corrupt individuals from corruption.

The cleric noted that religion can only persuade but the government has a major role to play in the fight against corruption. He said, “So much is being placed on religion and it ought not to be the case. Until the work of creating a functional state and an environment in which all of us can thrive whether we believe or we don’t believe, it will be tough to think religion will do more than it is already doing”.

The programme, which was supported by MacArthur Foundation, featured the launch of a Report on Citizen’s participation in elections and vote-selling behaviours in Nigeria authored by Dr. Leena Koni Hoffmann, Associate Fellow, Chatham House Africa Programme, and Dr. Raj Navanit Patel, Postdoctoral Fellow, Department of Philosophy, Politics and Economics, University of Pennsylvania.